Over the weekend I made the first piece of my costume for the con in August. I decided to make the underskirt first because I still haven't settled on any appropriate fabric for the dress. I am hoping to have a trip to Manchester to visit a few shops there which I loved whilst I was at uni.

The fabric for my petticoat was just a cheap poly-organza, which I have finished off with red satin bias tape and some white bias tape for the waistband in order to stop any fraying at the top of the petticoat and make the waistband secure.

I started by getting out the circle skirt pattern I drew up for myself a while ago so that I could measure the waist correctly.

My circle skirt is 15" long, as this was the shortest I could make it whilst still having it cover everything it should! Thankfully this made marking the lines for my two rows of ruffles really easy, as I could make the first 10" long and the second 5" long, splitting the length into perfect thirds.

After cutting out the circle skirt, I measured the length of each line and multiplied the figures by 1.5 to get the length needed for each row of ruffles.

Once my ruffles were cut I hand pleated them directly onto the circle skirt. I found this made them easier to control than having to attempt to evenly space gathers around the skirt and it gave me more control over the ruffles.

I zig zag stitched the selvedge of the ruffle pieces to the skirt and then, for extra stability and to further prevent any possible fraying, I turned the edge back over itself and zig zag stitched again. The double layer of zig zag stitching has made the ruffles in the fabric a little more stiff and defined, which I am happy about.

The skirt with all of the bias tape sewn onto the bottom holds a nice shape but isn't too fluffy, which means that it will not push the skirt out too much when I wear the finished costume.

The white bias tape around the waist adds stability and allowed me space to attach a few press studs to fasten it. Unfortunately the hook and bar fastener I had already was a little too wide, so I intend to finish it with a small hook and eye. I will also have to thread some elastic through the channel created by the bias tape as the waistband is slightly too big and sits closer to my hips currently.

All in all I am happy with how my little underskirt has turned out - just need to make the rest of the costume now! I already have the gloves, shoes, tights and the stars for the lapels and hat and I am hoping to purchase the buckram and wire to make the hat within the next few weeks so I can get on with that as soon as possible.

Still plenty of time for everything to come together! 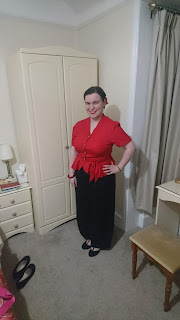 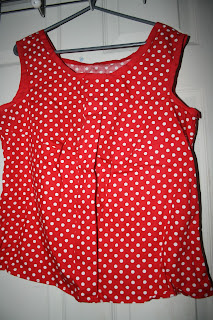